Affect Vs Effect - Which To Use and When?

Affect Vs Effect - Which To Use and When?

There is a slight difference between affect and effect that’s why it is easy to mix up both. Here, we can know about the short version of how to use affect vs effect. The word affect is a verb actually, that means to influence or change or to impact. The word effect is usually a noun, and it means a change which is a result. Check out the following situations and stabilize the phrases that break the general usage rules for these words.

Now the time has gone for using the basics, that’s why this is the time to learn and know the details about how to use affect and effect usefully. Or is it perceptual?  And when you are lucky, it may be the same. {For the unfamiliar, effective would mean successful in this context and when it comes to grammar the word success is for the goal}

The below given Infographics from Oxford Dictionaries is a good example: 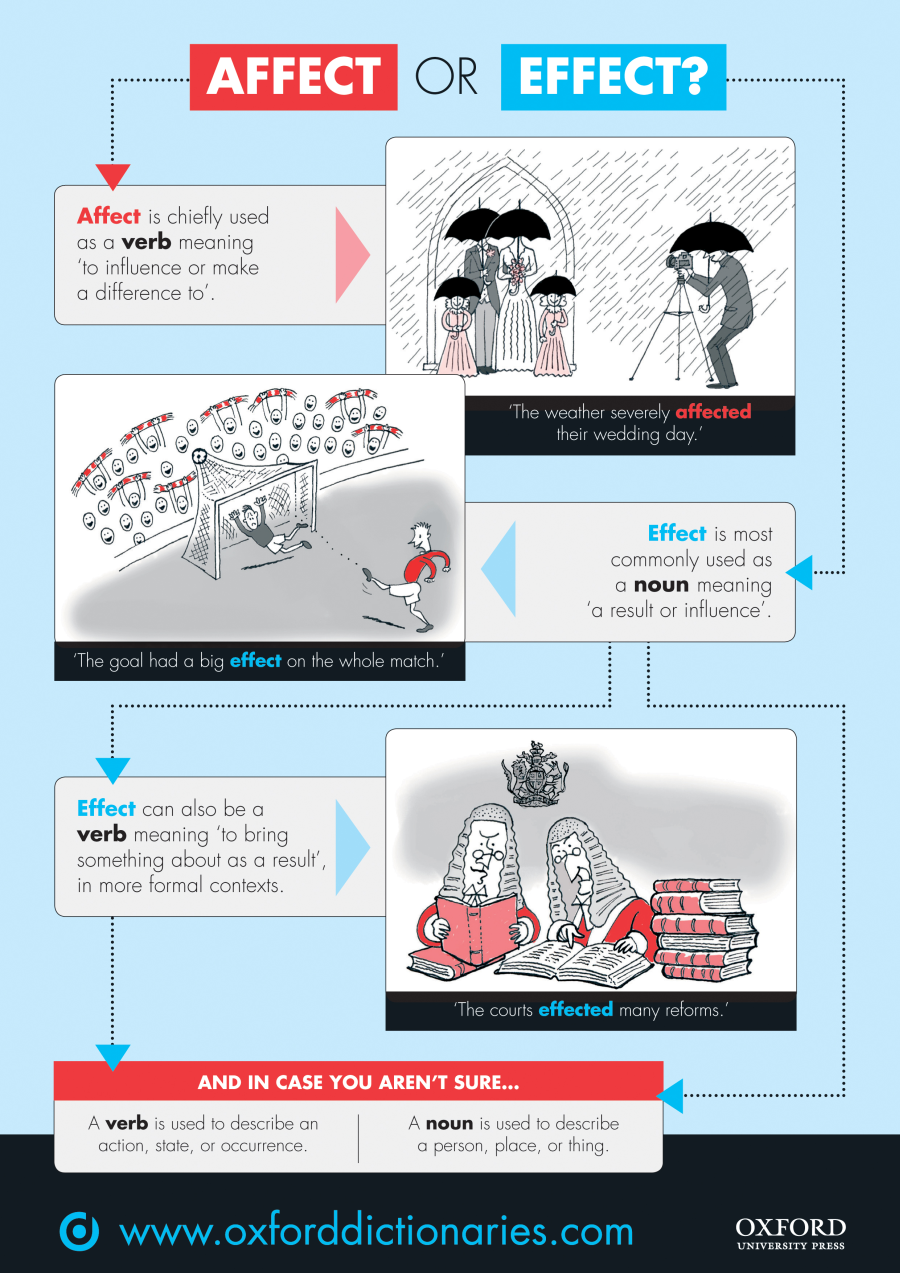 The difference between affect and effect

Is it affect or effect? On a shorter note, we can say affect is a verb and effect is a noun. At least generally in most cases you will face the words as these parts of speech.

Because john performed an action, that shows the use of a verb: affect. The result, or effect, of that verb is “wetness,” a noun mostly causing William a whole lot of discomfort.

Affect and effect are sound almost same but they are different parts of speech. Many people pronounce them as homophones that means well they sound alike. That’s why it is tricky. There are some words which are same in pronunciation but they are totally different like hear/here, write/right, hole/whole, etc. When it comes to writing the right word, then you will get help from following rules.

When to use Affect

Affect means to influence or to produce a modification on something. We can also say that having an effect on something. Like: The rising crime rate in that country will affect the housing market. Petting a cat or dog is known to affect blood pressure in a positive manner. Television can negatively affect young, developing minds.

Example: Sun affects everything in the universe, but the amount of heat and light affecting an object depends on one thing: the distance between the object and the sun.

Example: the validity of the remaining contract provisions will be affected by the decision.

Example: the symptoms are similar to other illnesses that affect the large intestine.

Note that in the second example, the contract provisions are affected because they are changed by the decisions, but this change is for profit or loss, it is a business factor.

When to use effect

Effect is a noun, and it means a change which is a result or outcome of an action. So, if an any happening affects your life, then you will feel the happening’s effect.

Example: she painted all the walls with a bright white paint and the effect was to make the seem much bigger than it was.

Example: the test of religion is its effect on conduct.

Example: the government is working very effectively after the disastrous earthquake.

Affect Vs Effect: how to remember the difference

For remembering the difference between them we can follow a simple trick. Affect with an A is an action and Effect with an E is an End-result.

Watch out for exceptions!

When you have mastered the basic difference that effect as a noun and affect as a verb. Then you will know the main twist thanks to English. In some contexts, effect is a verb and affect is a noun.

Effect as a verb

Effect as a verb means to bring on. It always shows up with the nouns like solutions or change.

In other words, they wanted to bring on the effect of change – may be getting the company to change its policies or even step down.

When we use the word affect in this sentence. Then it means that “to have an effect on change” or “to impact change”. The people like protestors who want to “affect change” would be trying to impact existing changes. That’s nice, but it’s a difficult job to creating a change especially when the corrupt government is on the line.

It doesn’t have to be quite so comprehensive, either. This is about the social media.

If all this about the social media had to do with the citizens trying to “affect change”, that would doubtless mean that they’re trying to speed up, slow down, or totally stop all forms of change that have to do with social media.

Affect as a noun

Example: The patient had a flat affect throughout the therapy session.

Now say what? The second example is a best example to understand this. Its great if you are studying basic about feelings and brain activity – that is what the example is about – but if you are not from this, then you are mostly safe with this knowledge where “affects” means feelings.

If you think that’s a slice complexed, no forceful affect. That is, no hard affection. Doubtless you don’t have to worry about this one so much unless you are from the field of psychology.

But now if you come across a position about a graduation speaker. Then they having a huge affect on her audience, so you have to be perfect. Whether the writer misspelled the “effect” or the entire graduating class was moved.

Affected as an Adjective

Indeed, this one emerges from left field. But affected can truly be used as an adjective to mean elaborate, artificial, or designed to impress. It is not a compliment always, and means that someone is acting stuck – up or trying to look like more important they are in actual.

Note that if someone acts like affected, it looks very differ when the people is affected by something on an emotional level. For example: the regent scratched one ear gently in affected abstraction. A sad ending of a movie might leave you deeply affected.

Let’s see what the regent did there? This guy is clearly knowing that he is not unprofessional that’s why his scratch is “affected”. Also he is very expert and competent. He may also think that he is the most professional and competent person around. Now think in this way: by his own arrogance and sense of superiority will affected the regent’s behaviour.

Recap: When to use Affect or Effect

Now we recap exactly how and when we use affect or effect:

Use the word “affect” as the verb in a sentence when you are discussing about making change and producing a difference. Also when something is influencing it means we are talking about the word affect. For example: A new discovery can affect a scientific theory, death of someone close can affect the life, and the result of the test can affect someone’s mood.

Here are some synonyms of affect are as follows:

The above list should affect your understanding of the word. In this case (in the last sentence), “affect” would mean “improve”.

“Effect” is a noun, and it is the result of an event or situation that created a difference. The effect of the change or modification can be big or small, but the reality is that something changed is what makes the noun form of effect so important. For example: a person can feel illness, cold, earthquake, and the when the sun is rising it gives you the positive effect on your mood.

There are some synonyms of effect including words like result, repercussion, consequence, outcome, end result, conclusions and the noun version of impact.

These two little words are extra tricky as they sound pretty much similar and alike. This was the homophone thing we had discussed earlier. Usually, almost all people have pronounced affect and effect almost exactly the same. But, every once in awhile, they won’t.

If you listen clearly, at some points you will be able to hear the clear and correct word. Also, differ the slight difference in the first syllable of the two different words. So, effect has a slightly stronger “eh”: sound like in “bed”, while affect is pronounced a bit more lazily, as “uh-ffect”. But these slight differences Is not fulfilling the expectation to tell one word from the other. If anyone can make the distinction at all is only a very careful enunciator.

There are few other phrases and unusual uses of these two words that deserve a glance are as follows:

So, if this article was affective then you were emotionally moved by learning the variability between the words “affect” and “effect”. If all this is effective then you will start using these words correctly from now and it will directly affect you in a positive manner.